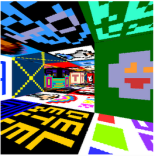 I’m attracted by something about “realtime visual collaboration on the web”.

COGS, CAG3S, CLUST3RS and KNOTS
A series of line drawings, produced with algorithms, collected into an interactive format for online presentation.