This image pictures a scarf produced by We Are in London.  Appropriation is a mercurial thing.  There have been many images of Glyphiti published in U.K.-based magazines (Mute, e.g.) and publications (for the National Science Museum, e.g.), so it’s reasonable to suppose that at some level the designers were influenced by printed matter.  Or it could be a screen snap of Glyphiti itself, with some cropping.  In any case, it would be nice to have a copy of the scarf. 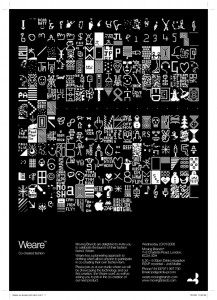