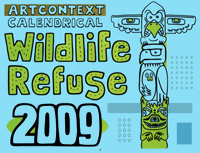 Wildlife of the Arctic Refuse! — Arctic wildlife ensnared in a war on animalism solve the problems of late naturalism in their cute and cuddly way. The publication continues the narrative project of the artist’s earlier Panel Junction editions.

Hapless flowers, windmills, trees, and small animals try to organize some type of response to climate change as a duper-hero clan of energy industry titans use their powers in the media and military to insure the supression of dissent and the continuation of their way of war. Lucha Neo-libre is Panel Junction #2 in calendar form, 12 pages of comic art influenced by user contributions through the artcontext.net website.

Spiral bound for your pleasure